A student told me today: 'You’re simply so awesome.' He said that last week too. 'Well good,' I was thinking. I was talking about Marxism, my favorite movie, The Life of Brian, the stoning scene in that movie, and being stoned in general. I mean, why don’t we ever vote into public office the ones that don’t wear a black suit? Ideology is a manipulation of rhetoric, some say. I believe that. All we need to do is pay attention to what words are being repeated by our politicians to get a sense of just how poor a state our thoughts and souls are in. In Denmark right now the holy cow is ‘democracy.’ Right. I run to Borges for a second opinion: “Democracy is an abuse of statistics,” he said, and he was right.

I got flowers today and a beautiful birthday card. Tomorrow I turn 45. That’s awesome enough. I look at my little fun table and enumerate the luminous things on it: A Victorian-time crystal ball next to a black tourmaline stone and a leaf skull. An antique Chinese bronze, enamelled censor, all the rage. I swear the incense smells better when it comes out of it. Next to it I have a Brazilian nut. For protection, the Brazilians say. Behind the scrying device there’s a stone filled with natural mountain crystals that my sister dragged all the way down from that witchy place, the top of Brocken in Germany. She was hiking there by night. She stumbled over the stone, picked it up, and decided that my name was written on it. When she realized how beautiful the stone was after she gave it a vigorous wash in the river the day after, she considered keeping it for herself. But then she got cold feet. You never know with those energies, and once a decision is made in that context, you don’t take anything back. The crystal ball looks on to the other crystals. My sister is good at gazing into the beyond. She is what they call ‘a natural’. Then there’s the Japanese bell that my friend with the card gave me. The sound of that can raise not only hell but some 9 heavens too. The pink Thulite stone sits next to some Samhain pumpkins and among cards. Lots and lots of cards. I’m of the opinion that if I didn’t read cards, I’d die from boredom. 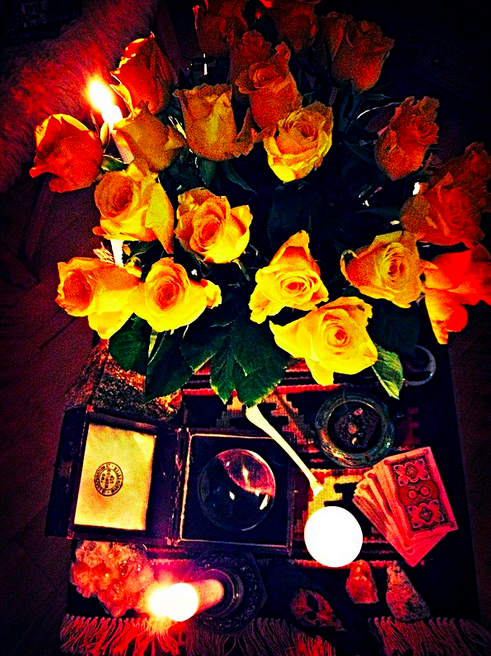 The birthday card I received today makes me think of the Lenormand cards. Taken together, the Mouse, the Heart, and the Moon suggest the following: spent passion leads to stoning. My friend is good with weeds, so who knows what she had in mind when she encoded the rune stone Thurisaz in the Moon. First I thought it was Wunjo, the rune of joy, but the more I look at the faint drawing behind the silver, the more I can see it’s the rune of monsters and giants. As they say, when going to the other world by any means, if you expect to see monsters, you’ll see monsters, and if you expect to see fairies, you’ll see fairies. Perhaps that’s what the Book on the birthday card is all about. The primary meaning of the Book in the Lenormand cards is secret, not knowledge. Some kind of smoke comes out of the Book. Before the book my friend drew a spark. First I thought it was a Star, the card of inspiration, but now that I think of it, I can see it’s a spark. Try to hit two stones together and see what you get. There are definitely two red dots in the Star, so, I’d say something is going on here. And I’m not saying this because I’ve just had a huge meal that consisted of entrails – my favorite kind of food steamed to perfection in the French pressure cooker along exotic spices that can indeed induce altered states of consciousness. 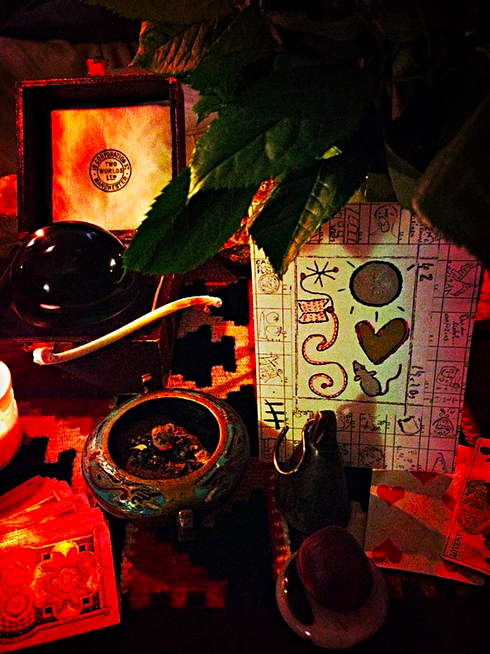 Although I don’t celebrate anniversaries, tomorrow my sister and the family circus will be visiting. I think I’m going to leave everything on my magical table as is. After another day of teaching, getting everyone into divining will be a good idea. Unless, of course, another student will tell me how awesome everything is. How awesome Gertrude Stein on the reading list is, and by association, how awesome I am again. At 45, if I can allow myself to say that I can do more than feel the pain of others, then I can also look at the roses and say, everything is as it should be. Just awesome. 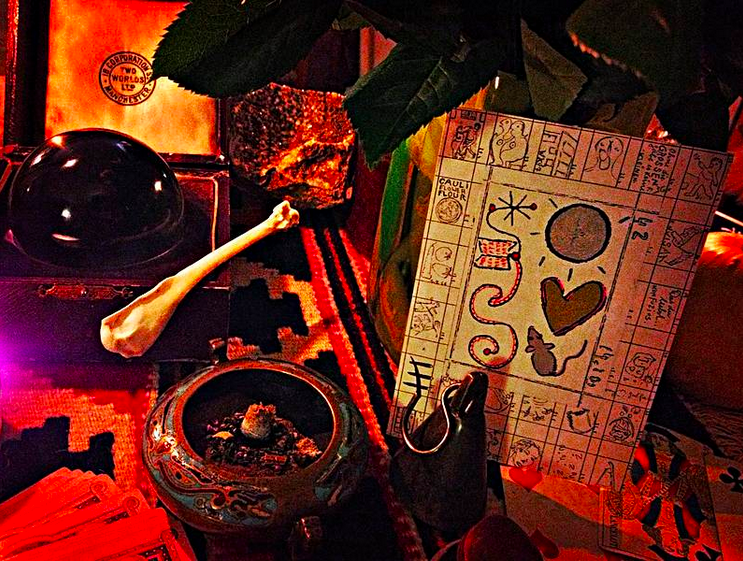