Consider the way of the stone fish: apt swords, lethal injections, the death of the song. The Australian Aborigines perform an ancient dance ritual to teach children about screaming. ’When did you start,’ Wittgenstein once asked a man who was counting the digits of Pi backwards. ’I never started’, the man replied. ’I’ve been counting down from all eternity’. So there we have them, then, the small infinities, the ones that Wittgenstein would have appreciated if it had occurred to him to say, ’and so less’ instead of ’and so on’ every time he wanted to indicate that now he was in the presence of infinity. Paleontologically speaking the otolith can’t hear that there are no infinite conjunctions and disjunctions. Logically speaking the last digit of Pi must be a scream. A silent scream. This is a species that the kabbalists know more about. The bush people have a different approach: they enact the suggestion that there is no logical reason to deny all species of infinitudes. The way of the stone fish is camouflage raised to the power of the silent scream. The way of the stone fish is to teach watching your step and walking on your hands. The feet in the air can follow the digits of Pi in the never started and so very less. 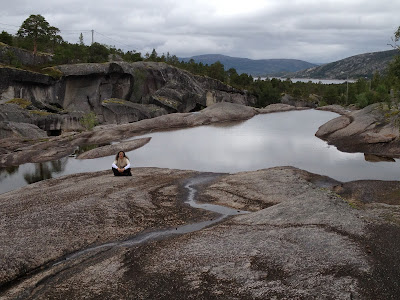