Back from the annual and wonderful PsyArt conference, this year taking place in Ghent, I ponder on what I have just learned. I get it confirmed that the way for me is still called detachment – especially from having to define myself through my job. As a general rule, I do at such gatherings what I always do: deliver a paper, have fun with friends, allow knowledge and wisdom to compete and acknowledge that wisdom wins every time, and read tarot cards. On catching up, friends who know me and ask me what I’m up to these days are not surprised by my answer: ‘I’m tired of rhetoric and want more magic in my life. Consequently I do more magic.’ ‘Good for you,’ they say, and some wish that they were as adventurous where matters of the expansion of the mind are concerned.

As scholars of psychoanalysis most of the people attending this conference deal with limited and troubled minds, so I understand their desire to plunge into simple thinking where simplicity is a way of persevering. Where new acquaintances are concerned, however, things are more delicate. As often is the case, some academics have a hard time with analogies. It never occurs to them to ask themselves why, for instance, they are more prone to accepting a scholar among them who identifies herself along the following lines: ‘I do comparative religion, my research is into church history, and my specialty is the holy guardian angel’ than accepting a scholar who says the following: ‘I do comparative religion, my research is into occultism, and my specialty is fortunetelling.’ This latter situation is frowned upon as if talking about the angels of the church is more reasonable than talking about the angels of tarot. Now to the million-dollar question: What is wrong with people’s vision? Why is the first thing – of which most people know nothing – more legit than the second thing – of which most people also know nothing? 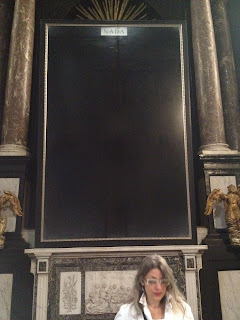 pnagy1231
July 10, 2012 at 3:15 pm (Edit)
Your snooty scholar, who values the academic esoteria and eschews the fortuneteller, falls for the occult conceit that the rare is where the hidden hides, when it is in the commonplace where the occult thrives without many noticing. Not analogy so much as prejudice occludes their insight, not imagination as much as compartmentalization, a propensity to assume abstract divides make concrete walls.

Reply
cameliaelias
July 11, 2012 at 10:44 am (Edit)
Paul, the trouble is with people’s blindspots. It never ceases to surprise me that, say, in the context of the conference referred to, while many people swear by a form of atheism, they nonetheless worship the god of psychoanalysis. As far as I’m concerned, I don’t believe in any organization, any dogma, any knowledge, and any religion. I believe in personal experience and the magic of living by finding things out for yourself, how it all works out for yourself. Sure, there are techniques and methods, but if they don’t work for you, then ditch them. The trouble is also that if you find yourself having invested, say, 30 years in psychoanalysis, you’re going to have a hard time admitting to yourself that something doesn’t work, when you can see that it doesn’t work. But that’s more of a personal tragic drama, to insist on a useless system, with people disclosing just how attached they are to things dictated to them. It takes courage to look inside yourself and make up your mind from therein. I find psychoanalysis fascinating and a better method than the quick fixes of cognitive psychology methods, but I still stick to my guns. If, as a clinical approach, it doesn’t work, then find something else to engage with. My personal preference is for psychomagic, the idea that not all revolves around finding a rational solution, precisely when there’s evidence that what is needed is a magical one. Ultimately I do believe that there’s more to it than knowledge. Knowledge is good to have, but, by Jove, there’s so much more out there, so much more.

May your running feet find the runway of the One Way and take off to fly higher than the collective or the individual pools of instinct, and intellect. Let them soak in the galactic abstract’s Pool of Wonder. Have a great summer.

Reply
cameliaelias
July 11, 2012 at 10:16 am (Edit)
Thanks for the good wishes. I will do just that, enjoy the wonders that surround us, and refrain from asking all the time, but what does it all mean? I never had a problem having one foot in logos and the other in mythos. Walking between the worlds works wonderfully for me.

“Magic is a series of psychological techniques so devised as to enable us to probe more deeply into ourselves.” — Israel Regardie”