If you so wish to construe this, I’ll say this
only: the Jew is not beholden
to forgiveness, of pity. You will have to
go forward block by block, for pity’s sake
irresolute as granite. Now move
to the next section.
(Geoffrey Hill, The Triumph of Love)

Even now, I tell myself, there is a language
to which I might speak and which
would rightly hear me;
responding with eloquence; in its turn,
negotiating sense without insult
given or injury taken.
Familiar to those who already know it
elsewhere as justice,
it is met also in the form of silence.
(Geoffrey Hill, The Triumph of Love)

In the Faust legend, Faust is able, with Mephistopheles’ help, to take nocturnal voyages, flying through the air to other times and places and summoning scenes and personages from them to his study. He is permitted to gaze on them – to have them as sights – but other interaction is impossible, including, explicitly, speech. In the face of knowledge, Faust is silenced.
Sheherazade’s position is the reverse of this. “Be silent then, for danger is in words.” (V.i.27), says Marlowe’s Faust to some companions before whom he is exhibiting Helen of Troy. But for Sheherazade danger lies in silence, death hovers at the edge of dawn on the horizon of light when all stories come to an end, inscribing her as well. Where Faust sells his soul for knowledge, Sheherazade saves her life by offering it.
(Lyn Hejinian, “La Faustienne”, from The Language of Inquiry)

Authority over being is thus dispersed, not because of the boundlessness, but in the boundlessness. We don’t – as writers or as persons – go beyond “all limitations” and “all boundaries” – we enter and inhabit them. Faced with the notorious gap in meaning, we may ask, “What should we do?” But we already know what to do. And this knowing what to do is neither derived from, nor does it produce guidelines – either prescriptive, proscriptive, or even descriptive. It is, rather, intrinsic to living in context.
(Lyn Hejinian, “Reason” from The Language of Inquiry)

A little knowledge is dangerous. So is a lot.
(From the TV program Eureka, 2006)

So, one has to make up one’s mind and have both, a little knowledge and a lot. Both this and that.
(Camelia Elias, on top of a mountain in Norway, 2008)

But who says that either one of us has a winning strategy? The law of the excluded middle says so.
(Jaakko Hintikka, The Game of Language, 1983) 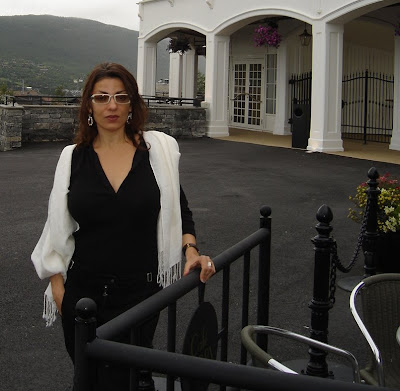 Anonymous said…
That was good humour! And after a long and wearisome walk in the blogosphere I found it, believe me!

And honestly, was rather impressed to see that you quoted Hintikka. Not many have even heard of him.
August 13, 2008 at 1:35 PM

Camelia said…
Ritwik, it's good to have you back. Thanks. I'm glad you thought of it as humorous. Regarding Hintikka, I like his work very much indeed. He's one of the better logicians who is not afraid of abstracts, and of thinking of "imaginary logical" solutions. I'm a pragmatist myself, but I often find the task of producing concrete answers for everything rather tedious and uninteresting. The law of the excluded middle has been on my mind for a while now, so any (poetical) insights will be appreciated.
August 13, 2008 at 1:44 PM

Anonymous said…
a lot of knowledge is sometimes needed to figure out the little knowledge necessary for things to be expressed with simplicity and eloquence. silence is the ultimate form of eloquence when one has that little knowledge:)
August 13, 2008 at 2:32 PM

Anonymous said…
I fancy a union between Sheherezada and Faust in the boundlessness of alternation between silence and words
August 13, 2008 at 2:52 PM

Camelia said…
Ioana, the problem with knowledge has always been in its encounter with uncertainty. That is, if knowledge happens, it happens and if it doesn’t, it doesn’t. The event of uncertainty rules. So there are never any guarantees for knowledge, little or small. Not even when we allow ourselves to grow into it, as it were. Or give it time. In my opinion, knowledge is bound up to language, not to time. As I was conversing with Ritwik above, who is a mathematician, I came to think of Hintikka’s other book (an edited collection of conference papers), Wittgenstein in Florida (don’t get too excited – no naked Wittgenstein here), where David Charles McCarty says this: “The language mechanism is infinite – boundless and all-embracing. It is complicated beyond intelligibility. We are linked to it and in it but we have no real notion of the details of its workings. Certainly we do not work it by grasping it or by lodging its governing principles in our minds” (73). McCarty takes his cue from Hintikka’s interest in “boundless space”. Hintikka is interesting in his creative understanding of types of events that can co-exist by bypassing the law of the excluded middle. This brings him close to such poets as Hejinian, who emphasizes how a person always rethinks constantly, while at the same time the context for such rethinking is always changing – so we keep busy permutating elements in otherwise linearly ordered narratives, thus saving ourselves from death induced by boredom. (see some fun thinking about Diodoran modalities - cf. Diodorus: the possible is either that which is or will be true at some point, the impossible is that which neither is nor will ever be true, and the necessary is that which both is and always will be true. BTW, here, Hintikka has been heavily championed lately by Vincent F. Hendricks).

About a union between Faust and Sheherazada – yes, but I prefer it to happen in Schrödinger’s box devoid of quantum decoherence. What the logicians have tried to grapple with for centuries, Schrödinger’s cat demonstrated: it is still neither dead, nor alive. Isn’t it just brilliant? Imagine that: to be or not to be? Both. To have or not to have? Both. Here or there? Both. In love or not in love? Both.
August 14, 2008 at 4:59 PM

Anonymous said…
This is very interesting. It’s so like you to mix things such as traveling to Jupiter or other SF planets, ask fantasy questions, and all the while expect realist answers. But how about unpredictability? Have you forgotten about that? If you create a lot of narrative that you use to defend your position with in the face of silence, you forget to be unpredictable. Or else there is the danger that your explanations become redundant. Not everyone is myopic and in need of either little or a lot of knowledge. Anyway, I love your sword, my musketeer sister. But remember what the Romanians say: “the sword will never cut the head that bows.” manna
August 14, 2008 at 11:22 PM

Camelia said…
Venerable and honest people. Good points. And how wonderful to have more knowledge produced here! But what gain we have of it in the end is a good question. I’m interested in the middle passage between inadequate knowledge (which invites the movement to seek more of it) and instrumental knowledge (which invites the movement of using however much or little of it we have). We can never ‘know’ knowledge’, nor can we ever be certainly certain. Or at least we don’t admit it, as other folks also say. A dance with uncertainty is the best we can hope for. Mediated uncertainty is embedded certainty.
August 15, 2008 at 1:55 PM