While contributing a solicited essay to a forthcoming book, This Ancient Heart: Landscape, Ancestor, Self (2015), and which gathers leading anthropologists and historians of religion who also happen to be druids, practicing shamans, or astrologers, I couldn’t help thinking that this particular area of study, that is, spiritualities in the world, has always stood me in good place. When I embarked on my years-long academic career in Denmark, culminating with the highest consecration in the form of what the Danes call the Dr.Phil. degree and tenure, I never thought that I was going to end up as an ‘eclectic’.

I blame it on my very first-semester group project at Aalborg University in 1993, when, although in the English program, I ended up writing about new religions with a focus on theosophy and scientology, Madame Blavatsky and Ron Hubbard. And I have to say that this was not even my idea. I mean, I wanted to write a project in religious studies (heh!), but I hadn’t at the time thought about any particular topic. Now, however, I am quite grateful to the one student in the group of 5 who came up with this focus, for I keep returning to both, Blavatsky, for her astonishing ideas of astral planes and thought-form, and Hubbard, for being so amusing, running off with the occultist and rocket-scientist Jack Parsons’s first wife and money, resulting in Parsons’ conjuring up a nice typhoon in a place where never in the history of meteorology have there been recorded any typhoons, and stopping the culprits from crossing the Mexican border and thus the possibility to avoid a lawsuit. Nothing can beat such stories.

Sometimes I want to say to myself, ‘that was a sign for what I ended up being interested in’, but then I go further back in my personal history and I find that I can’t really think of a time when I wasn’t interested in such things.

For the sake of convenience I tell people that I do English Studies with a twist, but these days I see myself conflating more and more ideas about practice and beliefs with knowledge systems, discourses on magic with the practice of magic that bypasses any beliefs, and Neo-Platonism with mnemonics and astronomy as inroads to the supreme knowledge of how to read between the lines. I’m grateful to the Anglo-American field for having produced enough material out there that allows me to dive straight into such weirdness and without feeling guilty for potentially doing something that may not exactly be aligned with the noble requirements for academic research.

Apart from having to care about gatekeeping and the other academics’ perception of my pursuits, I like it when people ‘in the know’ sometimes tell me that I can read cards and charts like a devil. But I like to think of it this way: Nothing is hidden. Nothing at all. And we can all train ourselves to register the magic around us. This kind of magic is not something that you read about in books, for it relies precisely on the ability to read between the lines. ‘What is there,’ some would ask, ‘apart from assumption?’ And I would answer: ‘Between the lines is not only the finest knowledge there is, the most subtle and therefore most powerful, but also love. Love that is anchored in what we know at the deepest level. The level of the highest creativity and imagination. The level of the highest fantasy that sends us with our noses straight into the ground, now filled with autumn leaves, and smelling of rain and tears. Our tears. The level of the mystical experience where the tapping into another’s consciousness is not merely a matter of belief or disbelief, but a matter of the highest practice, of the ‘being there’ all the time, watching. The level of the piercing gaze that sends you exploring the longest infinities that exist. The level of the mind when it is connected, plugged into things that make rationality look like a poor orphan.’

Indeed, some knowledge belongs to the ancient heart. It is not dogmatic, nor consecrated. It is the knowledge of the interstice, the place of the soul and of surrendering. 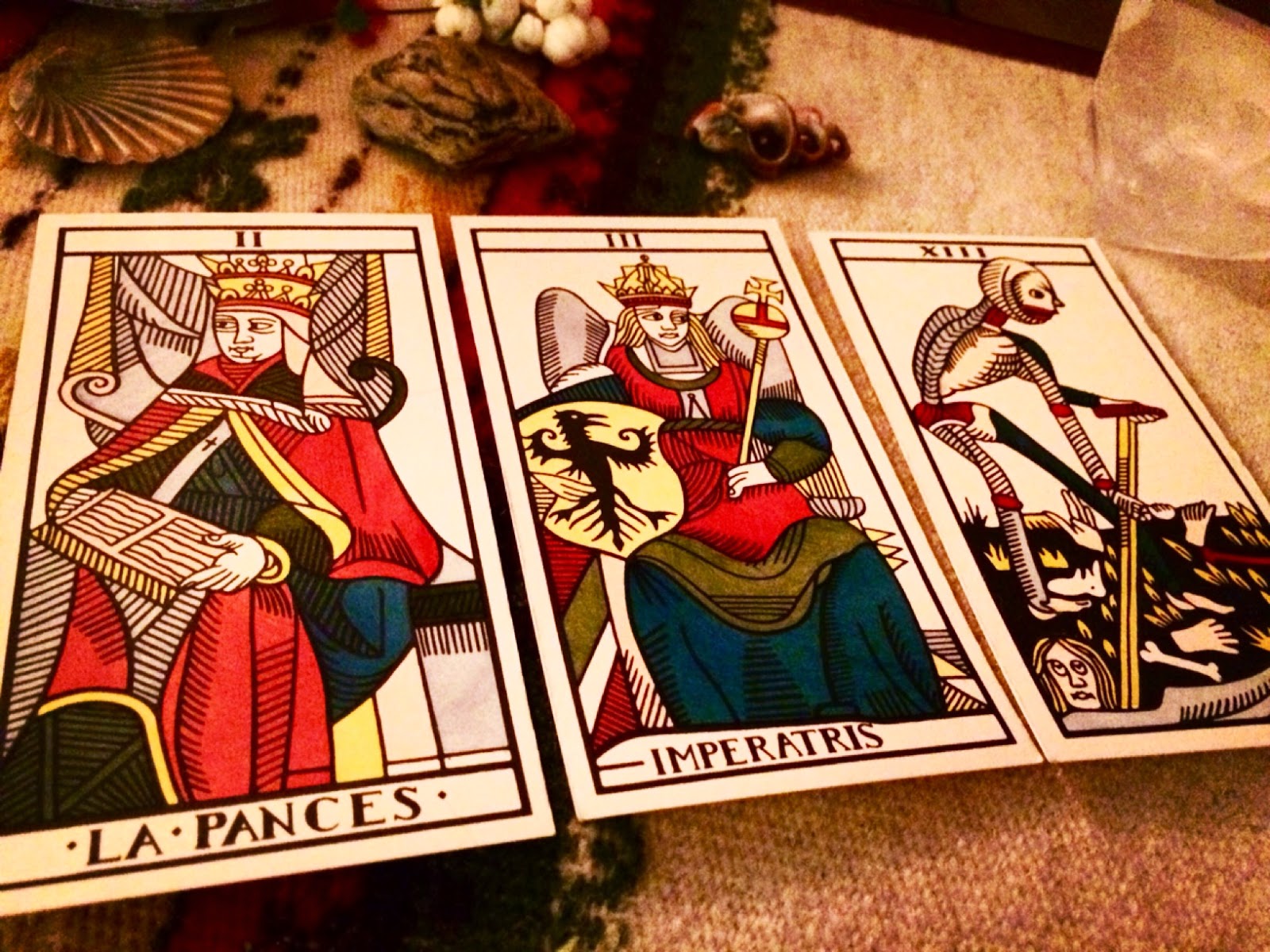 Anonymous said…
You know so much about magic and reading cards. sometimes I wish you'd spill the beans in a dumbed down manner so us not so smart folk can pick up that wisdom :P
October 3, 2014 at 10:13 PM

Camelia said…
Ah, listen, you shouldn't feel intimidated. If magic wants something from you, it will tell you. Try this: take a pack of cards with you to a quiet place in nature. Go to a nice tree at dusk, after the sunset. Sit by it. Tell it that you want to read the cards like a devil, or an angel, or a god. It's up to you, really. But be honest about it. Whoever you imagine you want to read the cards like, be honest about hir name. State your purpose with an inflamed heart. Think of me, if you like. Then sit some more. Feel the warmth of the cards in your hands. How do your hands feel like? Are they transparent yet? Can you swear that your fingers know all the cards by heart? Good. Ask your question. Be honest about it. Ask what you really want to know, not what you think you should ask. Don't be polite. Be violent in your question. The wind in the leaves can be gentle, so don't worry about overdoing it. You do want to read the cards like a god, don't you? Lay down three cards. Look at what's on them. Don't think. Not yet. Just look at the cards. You feel like stumbling. Remember you sit on top of old roots. They are not kidding about why they are there. Why should you? Look at the cards and let them formulate the logic of what you see. There will be logic, logic of the most solid kind. You get your answer. Say thank you for the wisdom and leave an offering. Walnuts is a good idea. They look like a brain. You will want to use yours. You will be ready for it. Good luck. Magic is no mystery. It's just there. It will take you places higher than you imagine - if it wants to. And if not, you will still have read the cards like a god. Can you ask for more? You cannot. Live magically. It's the only obligation. And then wait. The magic itself will revisit you. It will check on you. Show it your commitment. Do you even have a choice? Get real. What else is there? Conventions? Lord have mercy on our souls. Good luck.
October 3, 2014 at 10:47 PM

Anonymous said…
So poetic and beautiful yet challenging in the eyes of someone who can just see Richard Dawkins and James Randi shaking their heads at the thought of it all. I've tried reading the cards and using your blog as a reference for magic for over a year now and I still cannot aced it. I cannot see spirits, pick up crystals and feel anything, understand Astrology, or anything of the sort. I stay away from the woo woo stuff but everything you write in Taroflexions is so honest and feels like reality. It's far from what the New Age movement passes on it's no where near woo woo. I wish to pick up a deck of cards and read like a devil, I wish to wander in nature and connect spiritually as you do, I wish to bring home beautiful items from my adventures that I connect with and feel something magically. I just feel like I'm missing something.
October 4, 2014 at 3:13 AM

Camelia said…
Thank you for this heartfelt comment. I'll say this: practice makes perfect. If you are missing something, it's listening. And don't worry about people like Dawkins and Randi. They can talk, but they can't listen. Hence they miss out on a number of things. They are too impatient to get their point across. But what is that point? If you 'listen' to their writings, you will realize that it's filled with anxiety and fundamental fears. Such writing is devoid of the wisdom of real commonsense. Why waste time on prose like that? So, do what I said, and give yourself time. That's the only trick. There is no woo anywhere. It's just yourself disciplining yourself into doing something you will resist. Get your senses in there, all of them, and listen to your environment. Getting yourself in a most vigilant state and sharpening your acuity is the most difficult, but it can be done. The only requirement is to listen. Really listen. You won't feel the need for the 'rational' folks to come and rescue you from your silliness. You will be there between the worlds praising your luck for being able to say to yourself: I'm alive and I know it. This is the only kind of knowing that you need. Good luck.
October 4, 2014 at 11:36 AM

Camelia said…
P.S. I forgot to say that since you like Taroflexions, I've upgraded the conversation here to a post of its own on that site, as you voice a concern shared by many. So, thank you for inspiring me to say something that others may also find useful. Keep asking questions. They are the best.
October 4, 2014 at 12:54 PM

Anonymous said…
Wow. I guess the key here is to be in the moment and listen. That's definitely something I need to work on. Thank you for the post, I wasn't expecting that haha but I'm grateful.
October 4, 2014 at 7:09 PM

Camelia said…
Excellent. Now go over to Taroflexions. People are getting hot, and the comments they make there are very apt. Thanks again. It's very nice to see how this ping pong moves something in people. That's the whole point of magic. To move us.
October 4, 2014 at 8:09 PM