What people do behind our backs can be quite astonishing. But lucky for us if we like surprises – or signs. Signs are everywhere all the time – as some good masters have pointed out – and if we bother to think about ‘what it might all mean,’ we may be able to construe some narratives that are anything but boring. The veracity of these narratives is not the most interesting – sometimes knowing what we know is already more than enough, and if we should need proof, all we need to do is wait a little. Proof of the known unknown usually has a way of coming to us all by itself. Now, Derrida’s ghost is over me – blessed be his specter. It’s only been a few days ago that I was talking about him in a public forum, and yet now it looks like he wants to be even more forcefully resurrected. But, as befitting a grand master, he does it meta-style, circular-style, and roundabout-style, by imploding himself, as it were, in another text about me, so to speak. Which is to say that he has just managed to haunt the writer Gordon Lish, who once wrote about one ”Gordon Lish” and the death of his wife in his book Epigraph – on which I wrote myself in an old article, and in which I called on Derrida. Now, Lish, being haunted because Derrida calls back on me, has dug up this article of mine and re-published it himself HERE, thus fully resurrecting it along with pics which he stole from my website. Great move. And great pics. The whole affair reminded me of this great line of Jacques’: “When I have nothing to do in a public place, I photograph myself and with few exceptions burn myself” (Postcard, 37). Now I wonder how this applies to virtual public places. I go ask the cards. My old article compels me to do so, as it’s all about divination and hermetic traditions – though not so overtly stated. I was more cautious in those days. – I’m sure I’ll get an honest and straight answer – I always do. If not on what Derrida wants from me, then surely on how to own up to my own ghost. 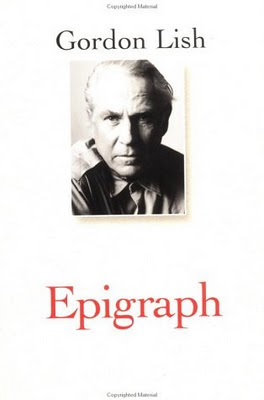 P.S I FORGOT TO SAY THAT I LOOOOVE GORDON LISH - HE MAKES ME LAUGH VERY HARD - thanks, Jewboy!
Email Post
Labels: writers