I'm having this exchange about fonts with Mark Daniel Cohen, who, like me right now, is pouring himself over InDesign designs. Those witnessing our fragments here, must remember that not long ago, in a post about theorems, we cut a deal for a book (in the comment box). Now the book is done, and it will be available on amazon.com next week. Stay tuned.

So, while uploading files here and there, Mark asked me what I thought of the letter E in Bembo italics. Well, I've been swooning already over his good taste in the layout, so I let him know that, yes, not only have I noticed the Es, but also that I got carried away in fantasy by the letter R and its connotations of regal feet—the Regina allowing graciously for the next letter to appear, but not so fast, not so fast. Her garment must unfold, so obviously, and necessarily, there's a lagging distance between R and whatever other letter that follows it. The cover, of course, suggests such royal preoccupations, which Mark did just for me.
Then he told me that he found it rather disturbing that the play “Coarctate: Antigone's Return,” following my introduction, starts exactly on page 33, which is the number he used for the draft file of the table of contents, a fictive number he gave the draft to get a sense of space. So, to begin with, there were 17 entries for 33, which makes a total of 561. Now, 5 + 6 + 1 is 11 + 1, another set of 3s. Ohhhh, yes, how lovely, we can all agree, for lack of better words or arithmetics.
Now, some would wonder why I choose to share all this private info. Because we are radicals, and because radicals like good stories. And because radicals can both laugh at themselves, the stories they tell, and the stories that numbers tell. This is what I call never ending entertainment. This is what I call laughing seriously. If you want to know what I mean, here's a preview of Mark's book, via my introduction: “A Touch of Tongues.”
Hopefully many of you out there will hurry to buy good writing next week, packaged in sublime design, and having all those other cosmic numerical geometries on top of everything else. 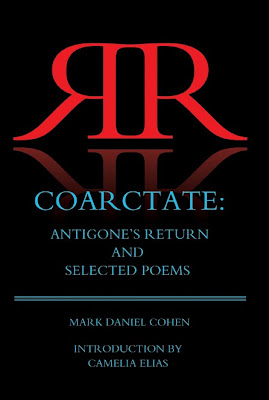 "In this volume, Mark Daniel Cohen offers, in the first part, a fresh and intelligent look at Sophocles, re-writing Antigone almost as a Beckettian version of Tristan and Isolde. The modern-day domestic drama is continued in the second part of the volume, in which selected poems aptly combine the trivial and the sublime, the mark and measure of every great classic. Camelia Elias writes the introduction under a contaminated spell."